Like humans, all cats are born with blue eyes. It isn’t until kittens are around six weeks of age that they start to develop pigmentation. Blue eyes are quite an unusual feature when it comes to cats making them a favorite among cat owners.

So, which cat breeds have blue eyes, and how common are they? Read on to find out all you need to know about cat breeds with blue eyes.

Siamese cats have been a favorite choice for pet owners for decades. Not only are they loved for their charming looks and icy blue eyes, but they also make wonderful companions and family pets.

Siamese cats are originally from Thailand, formerly known as Siam. They were thought to be sacred creatures and guarded Buddhist temples. They are known for being rather vocal and demanding, but their playful personalities and warm snuggles make up for it.

Ragdoll cats are known for their sweet nature, short fluffy hair, and charming blue eyes. Their easy-going nature makes them a great choice for a family pet as they are extremely tolerant around children.

They can take up to 5 years to mature and are happy to stay indoors lounging around the house.

Like most indoor cat breeds, the Ragdoll cat is a fan of routine and can become anxious if this changes. While they can be left alone, Ragdolls are quite needy, so they prefer having at least one person around.

The Himalayan cat is a medium to a large-sized cat with the piercing blue eyes of a Siamese and the coloring of a Persian cat.

They are known for their affectionate nature and easy-going temperament. Himalayan cats make great indoor pets, provided there is plenty to keep them entertained.

They are able to go outside to exercise but should be supervised in secure areas. Indoor cats can run into trouble easily in the outside world as they are unable to defend themselves against other animals.

The Birman is a heavily boned feline with long hair and striking blue eyes. They generally have a lifespan of between 12-16 years and appear quite large and stocky. Birman cats love attention and will quickly become your shadow, following you from room to room.

Known for their loving nature and laid-back attitude, Birman cats love children and will happily play dress up and be pushed around in a buggy! They are known to be quite territorial; however, they are not deemed aggressive.

Birman cats make great indoor pets and are happy to laze around the house, waking for short intervals to play and eat. If you want to let your Birman explore the outdoors, make sure they are supervised in a safe area. The outdoors pose a great risk to indoor cats as not only is there a risk of disease, but they are quite expensive to purchase, so they are also at risk of being taken away by another human.

Similar to the Siamese cat, the Balinese cat is known for its stunning blue eyes and long coat. They are usually described as elegant creatures that move gracefully with their long bushy tails.

Their fur comes in many different colors, such as seal point, apricot point, and blue point. Their lack of undercoat means their fur is less likely to tangle and matte – a bonus if you own a long-haired breed!

Known for their playful personalities, the Balinese cat is one of the most intelligent breeds in the world. They thrive off attention and can be highly vocal or “chatty.”

They love interactive games, which makes them the perfect pet for families with children. Extremely tolerant, they are happy to play games with children and are very sociable.

Balinese cats love exploring outside, but if kept as indoor pets, it is worth knowing that they often like to climb up high for a cat nap.

Native to Turkey, this cat breed has some truly stunning features, such as its piercing blue eyes and silky, soft-to-the-touch coat.

Turkish Angora cats have a low-maintenance fur coat that does not seem to matte or tangle despite being quite long.

They are a slave to routine and small changes such as moving furniture around or changing meal times can upset them. They are great companions and extremely affectionate. They crave attention from their owners so are best suited to families that aren’t away from the house for lengthy periods of time.

Turkish Angora cats have lots of energy and love playing interactive games. It is also a good idea to invest in different toys to keep them occupied when left alone. They love exploring the outdoors but should only be let outside if safe to do so.

Javanese cats typically weigh between 5 and 10 pounds and are extremely intelligent cats. With their charming blue eyes and elegant appearance, these cats are highly intelligent animals and are known for being quite vocal.

They are great companions and are perfect family pets that are generally good with children and cat-friendly dogs. An advantage to allergy sufferers may be that the Javanese cat has a single coat of fur which means less fur.

They are extremely playful and require lots of mental stimulation in the form of games and toys.

A cross between a Burmese and a Siamese cat, the Tonkinese is a relatively new cat breed, having been around since the 1950s.

Their athletic stature and startling blue eyes make them a favorite family house pet, and they love nothing more than being around their owners.

Confident and outgoing, these cats are able to learn all sorts of tricks and love interactive games, including ‘fetch.’ They boast short coats and are classed as low maintenance when it comes to grooming.

They adapt well to being indoor pets but can be let outdoors in a safe, supervised environment. They require lots of stimulation in the form of games and toys and also like to climb up into high places to view the world below. 10 Reasons Why Your Cat May Be Sleeping Too Much 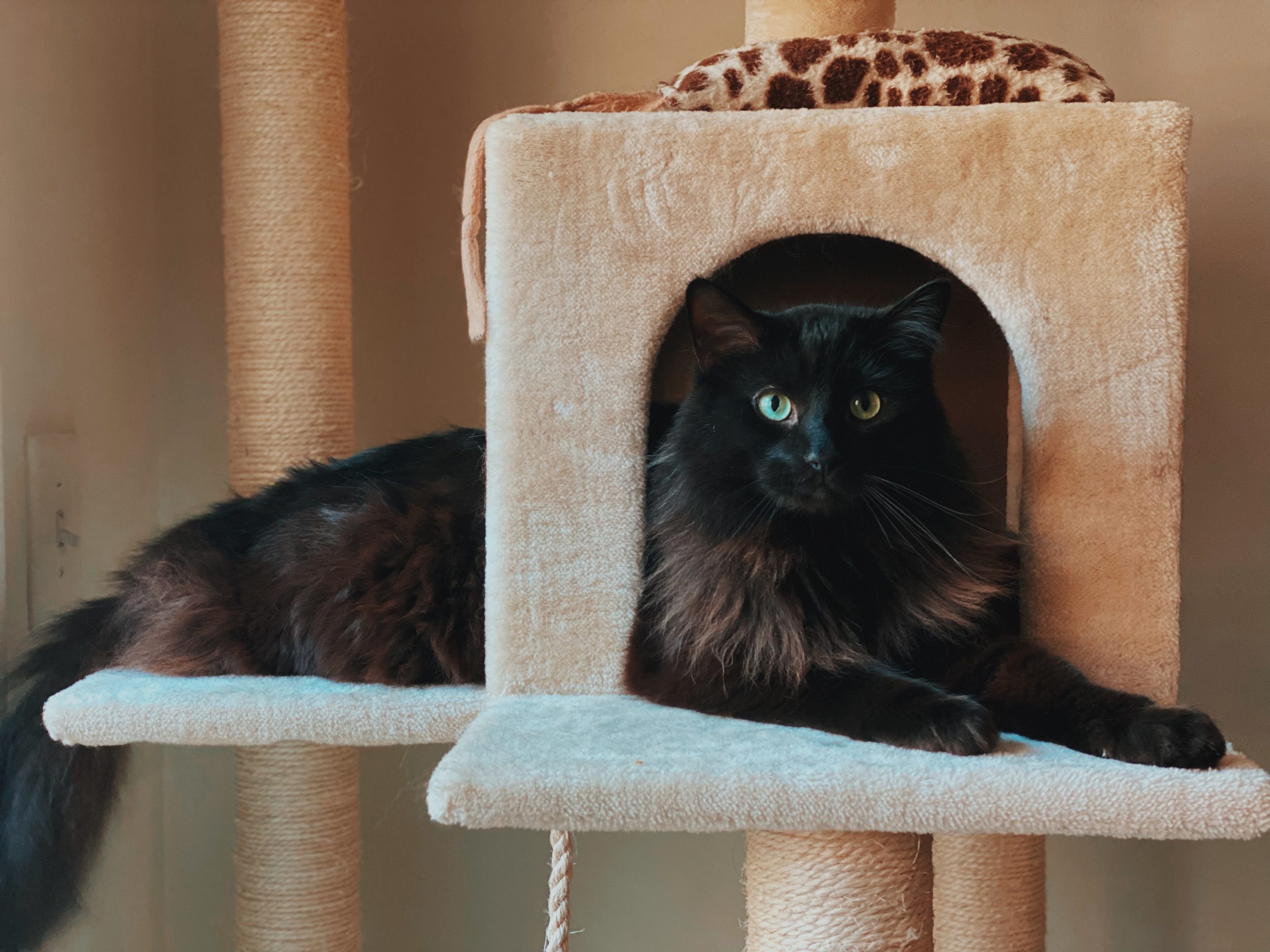 Keeping your feline friends happy, healthy, and entertained is the hallmark of a good pet owner. A good cat tree can help you with all three of these things. A bored cat can become destructive around the house, and a lazy or stressed cat can quickly become unhealthy. That’s why it’s essential to provide your… Does your cat get super excited every time you open a jar of olives? Can it recognize the scent from a mile away? This common behavior often surprises new cat parents. But don’t worry, it’s a perfectly normal feline response. Why Do Cats Like Green Olives? Your cat loves green olives for the same reason… Why Does My Cat Bite My Feet? How to Stop It?

As a cat parent, you sign up for certain things – cleaning up after your pet, torn up furniture, and on occasion biting and scratching.  They might look cute from a distance, but believe us, this feline behavior can get uncomfortable and painful. So you need to be fully prepared before you take on the…